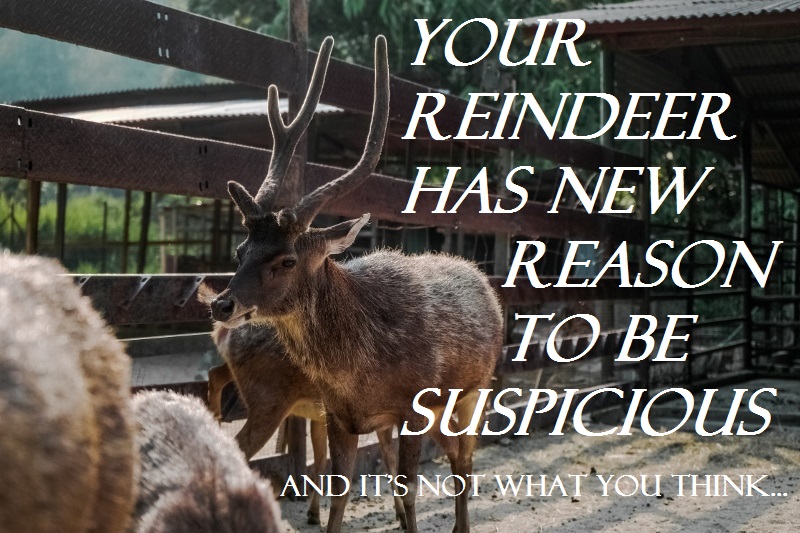 You know that old saying, “You can lead a reindeer to Norway, but you can’t keep Zeus, god of lightening, from striking it down”?

Well you should, because it’s very important.

Imagine you were hanging out on social media and saw an ad for cheap airfare to Norway and you thought to yourself, “Gee, my reindeer has never been to Norway. I bet he’d love it there.” And so you buy two tickets to Norway and even pay the fee for the upgrade to extra leg room for your reindeer because you are considerate like that and you care about your reindeer.

And then you fly to Norway and you and your beloved reindeer are having a wonderful time when BAM! Your reindeer is struck down by lightning.

“My reindeer doesn’t even have a current passport,” you say.

But it happens. It just happened to 300 reindeer in Norway.

Just like that Gerard Butler movie “The 300” where the Scottish invade Sparta or something.

Only this involved more reindeer.

Although I haven’t actually seen “The 300”, so there might be lots of reindeer in it.

You may be wondering what Zeus has against reindeer. If you’re at all familiar with Greek mythology, then you known that Zeus had this habit of cheating on his wife, Hera. Sometimes in order to keep from getting caught with a human woman, Zeus would turn the woman into livestock.

And so it becomes obvious that this wasn’t just any heard of reindeer. It apparently was an angry horde of 300 women who Zeus had turned into reindeer and then forgot about, all descending upon him at once.

That’s one theory of what happened anyway.

Reindeer travel in herds and are also very fuzzy. So it stands to reason that sometimes two reindeer will inadvertently (or perhaps advertently) rub together, creating static electricity. That’s how Rudolph managed to power that red nose of his.

So every reindeer in the world is wandering around with a certain amount of static electricity built up. Normally this doesn’t cause problems, but under the right circumstances, it can prove deadly.

By the right circumstances, I of course mean:

(1) Someone decides to lick a reindeer

(2) A large group of reindeer all touch at once, creating a complete circuit

So these 300 reindeer had all gathered together and one of them probably suggested they do “The Funky Chicken Dance”, as large groups of mammals are prone to do.

During that part where everyone do-see-dos, for the briefest moment, all 300 reindeer touched and a million watts of static electricity went off at once.

And just imagine being the person who witnessed this event: a nature photographer or perhaps a prominent reindeerologist. Someone asks you how those 300 reindeer died. You’d probably claim lightning.

Or, if you’re more like me, you’d explain the whole truth down to the last rump shake before the staticy explosion. But people would still look at you with the incredulity that you’ve normally earned.

And then lightning becomes the scapegoat yet again.