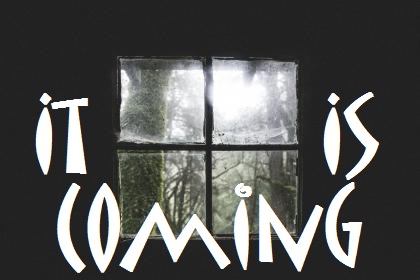 Once upon a time, there was a terrible horde. They plowed through the land, pillaging, marauding, and probably stopping some places to play Pokemon Go because apparently everyone is these days.  It’s like they’ve never seen that episode of Star Trek: The Next Generation to know that when everyone starts playing a game, that the game is all a plot by evil aliens designed to…well, actually I don’t remember what the plot of the aliens was, but I remember Wesley Crusher had to save everybody by reversing the polarity or something.

Anyway, this marauding horde was so fierce, no one could stop them. They were so invincible, they would send messages ahead to the next village they planned to attack. Panic would spread throughout the village, and some heroes tried to make defenses, but no amount of preparation could save them.

It was a dark day when my village received the message. It said simply:

There was wailing and gnashing of teeth. How could this be happening?

The village elders convened to use their wisdom to find a solution. After three days locked away in the council room, they emerged with their announcement.

The eldest elder announced to the people, “We have decided that we don’t know what a Windows 10 is. But maybe if we get some curtains, we can put them over the Windows 10.”

Shortly after, the village Millennials convened to come up with a less stupid suggestion.

Another answered, “There is no option for that. Look at the bottom of the message. It says only ‘Upgrade now’ or ‘Remind me later’.”

A third suggested, “Perhaps we can ask the Google gods to intercede!”

Another said, “Hey, if this whole Windows 10 thing doesn’t kill us all, I’m having a Pokemon Go themed Jamberry nail party you should all come!”

No conclusions were reached that day, except that more people would attend the Pokemon Go Jamberry nail party if 10% of the proceeds went to raising awareness for free-range chickens.

And so my village tried continuing to click “Remind me later”, as many a village had surely tried before us.

Eventually the horde descended upon us, upgrading my village without our consent and leaving in their wake, a slower, less user-friendly village that would never be the same again. Many a villager went missing. And, oh, the rebooting. How can there already be an update? AND WHERE THE HECK DID YOU MOVE MY FILE? AND WHY ARE MY PRINTER SETTINGS DIFFERENT?!?

Perhaps I will have to leave this village. I have heard of a sanctuary where the Windows horde never reaches. Those who speak of this place extol its virtues, but warn it is a long, hard journey there and probably out of my price range. But perhaps someday I will find myself in the legendary land of Mac.

Beware my tale of woe.

And it means death to us all…

…or at least a lot of computer cursing.

One thought on “IT IS COMING”