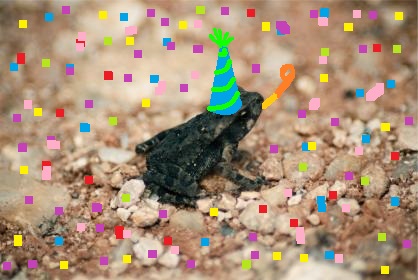 I tried to tell you people that if you paid attention to me, it would only encourage me.  Now here we are at my 100th blog post.

In honor of my 100th post, I thought I would share 100 thoughts that I have about stuff.

Then I remembered that I have a life (sometimes). So that list got shortened to 50. But if you read it twice, the math adds up.

And so I present to you:

100 Thoughts About Things If You Read It Twice

(Some of these I may have already used on my blog. I’ve written 100 posts. Give me a break.)

1.) If you can’t say anything nice, you’re legally obligated to say it on social media.

3.) I almost answered the phone today. I’m going to count that as my allotment of human interaction for the week.

4.) For those of you who haven’t done a lot of reading: “Man & Woman meet under inconvenient circumstances, hate each other, then fall in love.” Now you’ve read every romance story ever. Congrats!

5.) The most offensive thing you can ever do to anyone is wish them a “Happy” anything. Not sure why, but it seems to really tick people off these days.

6.) They have NFL Honor Awards. I think they’d be able to fill the time better if they made them the Dis-honor Awards. So many categories: Most Steroid Use, Most Baby Mamas, Most DUI’s Covered Up. I think people would watch it.

7.) I’m glad I don’t get report cards anymore. I really don’t want to see my attitudes and activities summed up. “Distracted; refused to interact with others; ate a lot of cheese.”

8.) Some days my entire to-do list is “Shower”. Those are the days it’s the saddest to realize I’m not going to make it through my to-do list.

9.) Sometimes I look at humanity like that person you want to break up with, but also feel sorry for, so you never do break up, but you keep wishing you would.

10.) I could never be a ninja because I never remember to put my phone on silent.

11.) I could also never be a ninja because my purse is too big.

12.) Why do people ever close their shower curtains? Don’t they know that attracts serial killers?

13.) Sometimes I think that one day I’ll reflect on this and make my therapist laugh.

14.) On the new X-Files show, there is a character who’s name is Dr. Einstein. That makes everything the people say to her sound sarcastic. “Are you okay, Einstein?” “What should we do now, Einstein?”

15.) If they ever made “Twitter: The Movie” (Don’t laugh. When you’re not willing to hire writers, that’s the sort of thing that happens), the first 120 characters would be previews

17.) I recently got my first social media message from an unfamiliar Muslim group that could have been ISIS. I shut off my computer, opened my window, and shouted “I need an adult!”

18.) My dog and I would be great on a soap opera. Most of our conversations happen while we stare dramatically at each other.

19.) I chose to become a writer because being a person who sells their plasma paid too well.

20.) I also became a writer because choosing a career that people respect is overrated. I’m assuming.

21.) When actresses say they were very comfortable filming a nude scene because they had a “closed set”, I wonder if nobody told the actress that the movie is getting a world-wide release.

22.) I understand that Soylent green is made from people, but what I really want to know is just is it gluten free?

23.) Music is important because how much more obnoxious would it be to have a speech get stuck in your head and just keep playing over and over and over?

25.) Waldo’s shirt is only half red, half with white stripes, but if I was him, I still wouldn’t chance going with the away team on Star Trek.

26.) What we need to take down Kim Jong-Un’s North Korean dictatorship is an anxty teen with a grudge and two love interests. That never fails.

28.) I’m pretty sure I ended up how I am because my mother read a LOT of books while she was pregnant with me.

29.) I don’t appreciate it when people call me back after our phone call drops. Inevitably I’m standing in public, talking unawares into my phone when it starts ringing.

30.) Maternity wards are one of the worst places to try and find a date

31.) Sometimes my life is like those old “Choose Your Own Adventure” books: “You take homemade rolls out of the oven. Do you (1) use a spatula to take them off the baking sheet or (2) burn your fingers again?”

32.) My dog is kind of a dis-service dog. She knows when I have to get up early and keeps me awake those nights.

33.) Some mornings I set my cup of coffee down and then can’t find it. Then I have to get more coffee so I’ll have enough energy to deal with that problem.

34.) If I ever started a band, I’d name my band “Tonight’s Show Cancelled”. Crowds make me nervous. I think the band name would help with that.

35.) I hope when I die that my obituary makes my life sound really exciting just in case my ex-boyfriend reads it.

36.) If they made a holiday called “Go to Work Like Normal Day”, on the night before, would you get too excited about it to sleep?

37.) Speaking of holidays, Tomorrow Eve is a day we just don’t celebrate enough.

38.) I think 5 is the cap on how many birds you can see outside your window before you start thinking “It’s happening! Hitchcock was right!”

39.) I don’t know why people don’t like going to their high school reunions. I love to go and tell everyone I’m a blogger now so they have to pretend to not be impressed.

40.) Why is the idea of “breaking the internet” so popular these days? Don’t people realize that only ends in sitting on hold forever, waiting for customer service to fix it?

41.) If a song plays on the radio, but most of the lyrics are bleeped out, does anyone really hear it?

42.) What is a Social Media Influencer? My guess is it’s like when I said “Man, I hate mushrooms” on Facebook and two other people were like, “Me, too!” Trend started. You’re welcome.

43.) Breakups are only bad when more than one person is involved.

44.) When you become a parent, do you instantly gain orange-peeling skills? Because I’m not sure I want kids, but I love oranges, yet I cannot peel them. It might be worth it.

45.) Usain Bolt told an interviewer he’s not a morning person. Glad to know I have what it takes to be an Olympian: not liking mornings.

46.) In case you haven’t noticed I have a distorted view of reality. I showed up late, after reality had already started, so they had to seat me in the very back row, which is why I can only kind of see reality if I squint really hard.

48.) I chose not to allow testimonials on my site because I’m a very humble person. Also, if my blog has changed your life, I’m pretty sure you’re reading it wrong.

50.) A little suffering never hurt anybody.