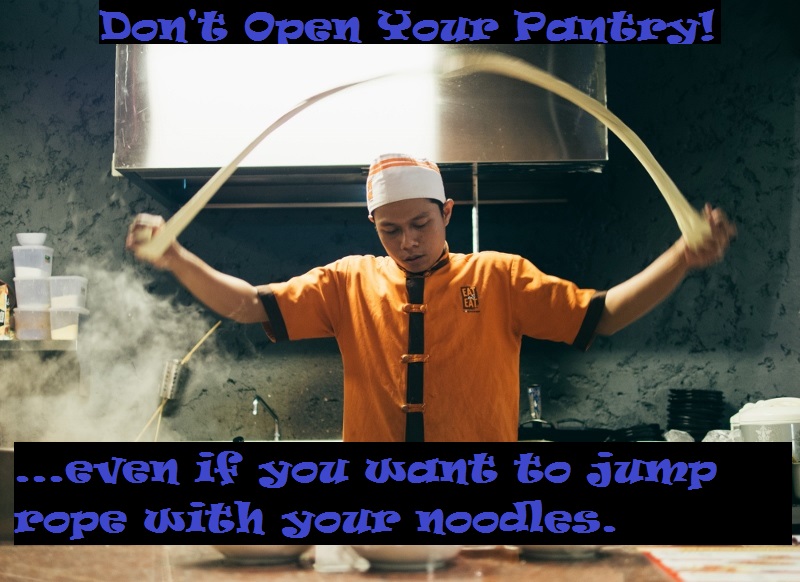 Some time last year I claimed that there was an impending vegetable-induced apocalypse (or “vegapocalypse” as it would have been called if any media outlets had responded to my phone calls).

This obviously did not come to pass.  At least not that I have noticed.

Then again, I don’t get out much.

But I’m sure someone would have texted me.

After further review, I realized that radishes are inanimate objects, and so do not harbor ambition for world domination.

So I see where I made my mistake.  And I am sorry if I caused a panic.

And that is why I feel confident to now declare that you should not panic, but the apocalypse is coming.

But this time, it’ll actually happen.

I’m not talking about some ginormous, but armless, radishes.  This is a much more believable threat.

I am talking about this: 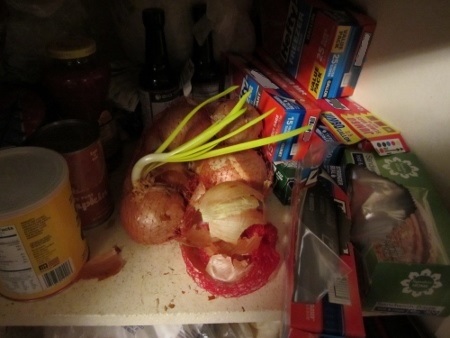 Your eyes do not deceive you.  That is an actual onion in my pantry.

And those are very clearly the menacing tentacles of a giant squid bursting forth from said onion.

I know it’s hard to tell in the picture, but those tentacles were writhing around in a very menacing way while I risked life and limb to bring you this image.  I would have gotten an even closer shot, but it threw that can of pumpkin at me, so I had no choice but to retreat to safety.  I hate pumpkin.

My worst fear has inevitably come to pass: giant squid monsters from another dimension have finally figured out how to build portals to our dimension using our very own onions as doorways.

I don’t like to say “I told you so”, especially when I did not actually tell you this, but I told you so.

Mexican and Thai restaurants will naturally be the first to fall, what with their beautiful abundance of onions.  And then humanity is doomed because what point is there to fight if there’s no Mexican or Thai food anymore?  Greek food?  I don’t think so.  You’re going to try to rally people with the cry “Give me feta or give me death?”  I don’t think so.  Queso, on the other hand, inspires nations.

And I know for a fact that squids have ample appendages for enslaving humanity.  Just like an octopus has 8 tentacles (hence “oct”, meaning “8” and “opus” meaning “a compilation of works and/or feet”), a squid has…well, whatever number “squi” stands for.  And that, I’m almost positive, is a number that is greater than or equal to one.  Unless it’s metric.

Worst of all, these creatures seem to have an affinity for resalable food storage bags.  Obviously, so do I.

Which leads me to the point at which you should start panicking:

I think I may actually be a giant squid monster from another dimension.

All the signs are there:

And you have to admit: it does explain a LOT about this blog.

4 thoughts on “Don’t Open Your Pantry”