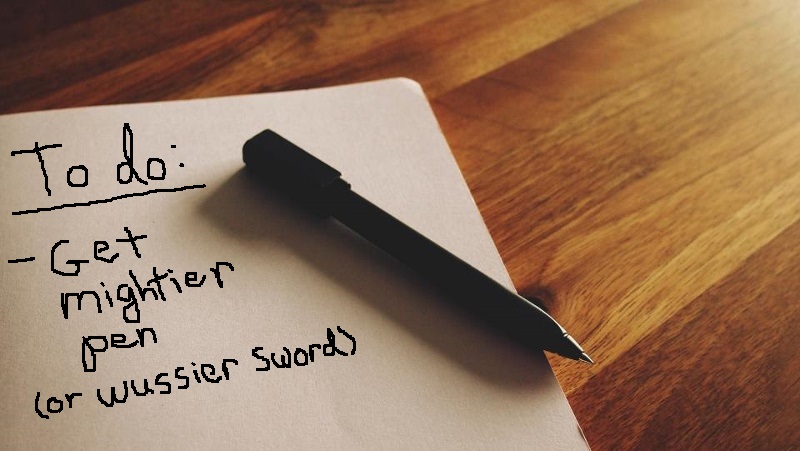 Friends like to say to me, “Veronica, I loved that murder mystery on Mars you wrote, which I bought at THIS LINK.”

“Because SOMEBODY has to do some promotion for your book and you stink at it.”

“Anyway,” they say. “I can’t wait to read the thrilling sequel. How’s that coming along?”

“Oh, alright I guess. HEY! LOOK OVER THERE!”

Then I have to chloroform them, run away, speed home, get my emergency “Someone asked about the book I’m working on” supply kit and my puppy, hop on a plane, fly somewhere new, change my name, dye my hair, dye my puppy’s hair, grow a beard, shave it off (realizing I look terrible in a beard), and start a new life among people who don’t know I’m writing a book.

Maybe that’s a bit of a knee-jerk reaction. But as a writer, it can be hard to talk about a work-in-progress, or as we authors lovingly call it, a WIP (that is a true fact).

That’s because first drafts stink. They are full of plot holes, characters change names and sometimes gender, and things just happen because you need them to, not because you have a good reason for them to.

Here is a literary interpretation of a dramatic reenactment of a typical scene of a first draft of a book:

“Quick! We have to find Bob before the murderer does!” Steve said as he embraced Anna.

Amy pulled out of Steve’s arms and stared at him for what seemed like ages.

Yup, she just kept staring at him.

It was like the longest stare ever in the history of stairs. Stairs? Stehrs? Sderz? How did I lose the ability to spell that word halfway through a sentence?!?

Finally Amanda answered Steve’s question, whatever it had been. “We have to go to the woods because that’s where the next scene is. We’ll figure out why we go to the woods in the re-write.”

Alexi stared at him. Wait, she already did that. So, she did something totally different. She turned away from him, in fact, instead staring at…whatever was not in the general vicinity of Steve, like a tree and a vase and a cat and a baseball card and some asparagus.

Steve asked again, “Ava? Is that the scene I die in?”

Steve smiled. “Oh good. But how will we get to the woods from here?”

Antoinette wept over Steve’s dead body in the woods

So first drafts are embarrassing and not fun to talk about. Then it gets worse, because inevitably the question that follows “How’s the book going?” is “Can I read it?”

When you say, “No! You want to read something, write your own dang book!” people then think you’re rude for some reason.

They don’t understand that if you were to let them read it, they’d be so overwhelmed by the confusing, messy mash of words that is a first draft that they would probably go blind. Then they would spend the rest of their life thinking there should be some sort of law against you being allowed to write words.

You think I’m exaggerating. But here is a real life example of how messy first drafts are:

A couple years ago, I was writing a book. One night I wrote that a side character (we’ll call him Steve to protect his identity) was shot and fell out of a flying plane. By the next day of writing, Steve had apparently made a full recovery and gotten back on the plane even though it hadn’t landed.

But that story had a happy ending because I admired Steve’s moxie so much, I revised his death and he then survived to the end of the book. I imagine he has become a legend among side-characters. “That’s Steve!” they say. “He didn’t just sit back and let his writer kill him off! I hope when I get written, I can be just like him!”

My first drafts are also super long until I go back and take out all the times I typed in the note “Fix this later”. I should save myself time and just name a character in every book Fixthi Slater.

Steve said, “Quick! We have to find Bob before Fixthi Slater kills him!”

Appletini replied, “But how will we end this blog post?”

Just then, Fixthi Slater jumped out from behind some asparagus and forced them to end the blog post.