Once upon a time, there was a beautiful blogger who had an adorable puppy and some weird hobbies. One of those hobbies was learning to play an ancient Chinese musical instrument called the erhu. An erhu looks like this: 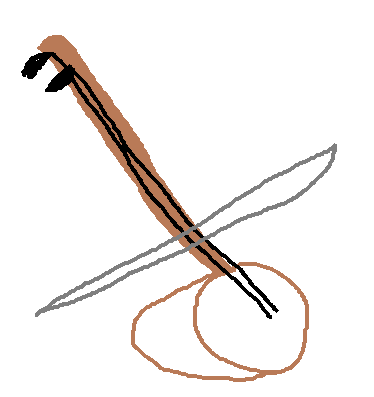 Or at least that’s what an erhu would look like if it had been made by a blind 3 year old. But maybe if you knew what an erhu looked like, you would be able to interpret the picture better. So that’s really your fault.

Why did this blogger decide to play the erhu? Because it’s weird and so is she, so it’s a match made in heaven. Also, it’s not as hard to feel you are excelling at something when most people don’t even know what it is:

“Oh, you don’t know what an erhu is? Well, I not only know what it is, I can play upwards of 3 different notes on it. Two of them won’t even make your ears bleed.”

Anyway, it was the 3rd anniversary of this particular blogger’s erhu lessons. Her teacher played a beautiful melody and she played it back to him, although you really wouldn’t know it was the same song because the erhu is really hard to play even after three years of lessons, okay?! Even harder than drawing one.

Um…anyway, the two of them were so happy that even the overcast sky couldn’t ruin their joy. But that’s when the melody was interrupted by a knock on the doorbell.

The blogger looked from the door to her teacher. In his eyes she could see that it was not an unexpected guest. He had known this moment was coming, even as they had laughed over memories of their shared 3 years of erhu. Why had he not told her? Why had he not prepared her? It was too late now to break the news gently, so he just spoke it boldly as he could.

She gasped. New student? How could he have taken on a new student? Wasn’t she frustrating enough for him? Weren’t her excuses about why she hadn’t practiced for the 156th week in a row creative enough?

Before the blogger could stop him, her teacher had opened the door.

In the imposter came, victory flashing in her eyes before the battle had even begun. The two students shook hands.

“Hello,” this new woman chided. Then she threatened, “It’s nice to meet you.”

Not willing to give an inch, the old student stood her ground and warned her, “It’s nice to meet you, too!”

There was so much running through the old student’s mind. She had never dreamed of having to share her teacher. Who knew her town was such a hot-bed for ancient Chinese instrument learning?

And what if this new student played better than her? What if she was a faster learner?!? WHAT IF SHE ACTUALLY PRACTICED?!?

If this new student did indeed practice every day like some kind of sick, twisted, good student, it would only be a matter of time before she caught up and even surpassed the old student (who, by the way is only 30 and so really not that old of a student). She could not let that happen. She would have to do whatever it took to stay ahead of the teacher-thiefter (Rhyming is fun), even if that meant playing her erhu more than just ten minutes on Saturday the night before her lesson.

And more than just Sunday morning 5 minutes before she had to go to her lesson.

Maybe even more than just one more time than that.

She was going to have to knuckle down.

She had no choice.

This was musical war.