Things That Go Bump in the Water 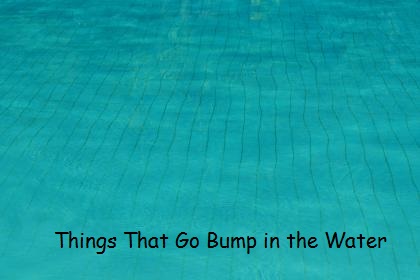 You, unlike me, may have noticed my absence last week. It may have caused you to feel depressed, demoted, detangled, decaffeinated or even defenestrated.

What I’m trying to say is that you are kind of a wuss.

But I have a good reason for taking a week off my blog. I’ve mentioned that I was stage managing a play and horribly sleep deprived.

That was an obvious lie.

I was actually at the Olympics, competing for my country.

When I say “my country”, I don’t mean America.

I mean my own personal country. I recently declared myself a country. Then I proudly beat out everyone else in my country for a spot on my country’s Olympic team in every sport.

It turns out I run so slow, I can’t even beat myself in a race.

So I entered myself in the Olympics. I knew they were adding several new sports to the Olympics this year, like Olympic Golf (much less exciting than it sounds). I decided if I really wanted to win a medal, it wasn’t enough to be just better than everyone else in my country. I needed to pick things that I am possibly better at than people in other countries.

That’s how I picked to enter myself in the following Olympic spots:

-Olympic taking the plastic off of new DVD’s

It was not until I arrived in Rio that I was informed those sports were not being recognized by the Olympic committee anymore. Or possibly ever.

But nobody ever said winning an Olympic medal was easy. Except probably Michael Phelps.

Undeterred, I quickly scanned the list of possible sports to compete in.

And that’s how I became my country’s first Olympic Water Polo team.

You probably didn’t see me in the broadcast of the Opening Ceremonies, but rest assured I was there and I marched. It’s just like how a lot of people missed the United States because the Portuguese spell the letter “U” with an “E”. In Portuguese, the name “Veronica” starts with whatever letter you missed while you were in the bathroom.

But I’ll tell you how it went.

I was greatly honored to be selected to carry our country’s flag, narrowly beating out my fellow Water Polo teammate, my puppy. She was licking herself when the voting for flag bearer was held.

It was going well until I did the inevitable and tripped.

And kind of knocked my flower-bedazzled tricycle guide off her tricycle. Then my flag landed on the ground, requiring that it be respectfully burned.

Which is how I ended up on fire.

I remembered to stop, drop, and roll. But it turns out the confetti now sprinkled all over the ground was quite flammable.

Also, I tripped the guy carrying the Olympic torch. He dropped his torch, lighting even more of the confetti on fire.

So overall, it went better than I expected.

As for our Water Polo match, we played our best and gave 110%, but unfortunately we did not receive a medal. Really there were two factors that caused this:

(1) My puppy refused to get in the pool. She was convinced the whole summer Olympics was just a ploy to make her take a bath, which, to be fair, it was (Thanks for trying anyway, Rio)

(2) I don’t want to sound like a sore loser, but the other Water Polo team was cheating. I won’t say which country it was, but their name rhymes with China (the fancy dishes). Not one of their players ever responded “Polo” no matter how many times I shouted “Water”, so how was I ever supposed to find anyone with my eyes closed? And then one of them threw a ball at my face.

One thought on “Things That Go Bump in the Water”